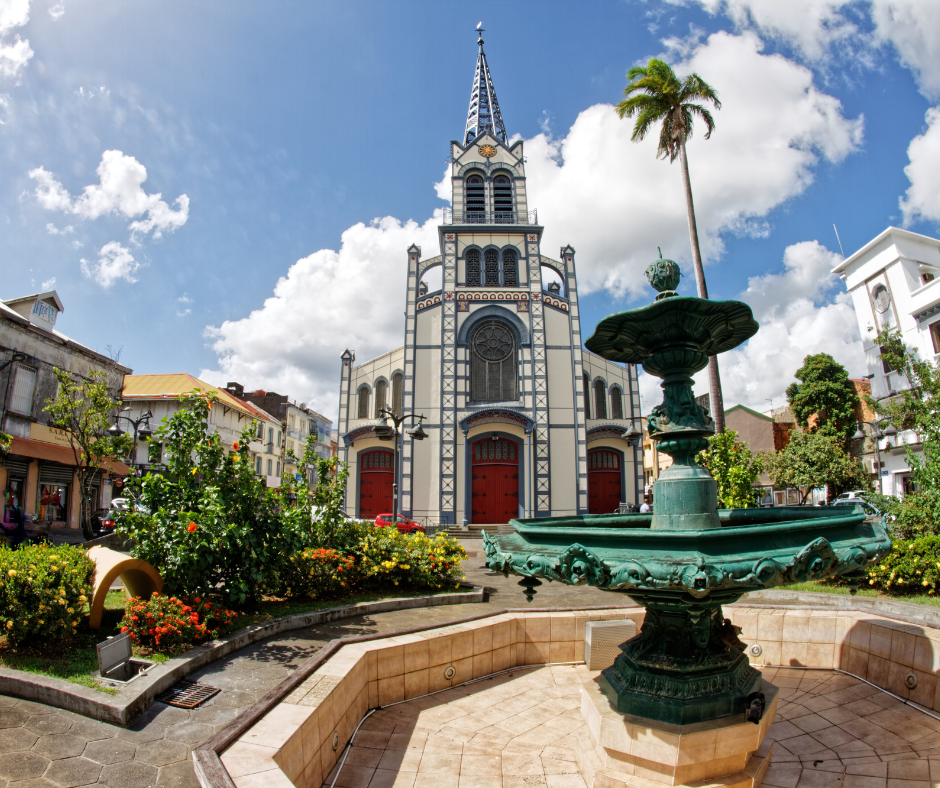 Formerly known as “Father Labbat Square”, it became Mgr. Oscar Romero Square in August 1980 in homage to the memory of the Salvadoran priest so named, who died as a martyr for being the defender of peasants in his diocese. He was assassinated during Mass in March 1980, by the military junta, while he was Archbishop of San Salvador.

The Saint-Louis Cathedral standing today is the result of a succession of construction episodes in this very location.
It is the most solid part of the city, a half-moon shaped limestone ridge that runs as far as the Fort Saint-Louis. The rest of the city lies on very friable and loose alluvial terrains.
In 1891, after the destruction that had occurred a year earlier, as the architect Henri Picq was visiting Martinique for the works being conducted on the Schoelcher Library, the municipality and the Fabrique Corporation (…) seized the opportunity and asked him to draw up the plans for the reconstruction of the cathedral. The work was completed in 1895. Henry Picq designed a Roman-Byzantine style building structured around an iron frame, iron being his preferred material. He arranged many openings.
Measuring over 66 meters long and 24.50 meters wide, with a bell tower rising to 58.80 meters, the cathedral is one of the tallest buildings in the heart of the city.

The cathedral as we know it today is designed by Picq. It combines neo-gothic, neo-renaissance and neo-byzantine influences. It was built in 1893 following the great fire of 1890 and the cyclone of 1891. Its structure, made of iron and cast iron incorporated, rises above the neighboring buildings. Ventilation is a key element, evidenced by its open bell tower, restored identically to the original to allow the prevailing winds to pass through.
Yet another symbol is the great height of the building that brings in a lot of natural light.
The building was dedicated on July 2, 1895. It has since undergone several restorations during the years 1919-1920 and, more recently, between 1976 and 1979.
Listed as a historic monument in 1990, the building is rather impressive.